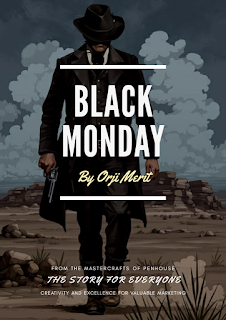 Revenge kills your enemy and kills you too

Wawu! Wawu! Wawu! Came the sound of buzzing siren everywhere. Reporters are flagging here and there and police detectives are all searching the whole area. That’s their job of course.
“The famous terrorist known as black Monday has done it again. The corpse of Senator Humphrey was found on the road side and was tagged number 3. Making it the third top government official killed in a space of three months since his terrorism began. He has clearly stated that they are seven in number and if not completed the country won’t be at rest. The question remains, what has these government officials done to him. No one knows who is next. The police are trying their best to catch the culprit and send him behind the bars. Listeners the big question here is, IS BLACK MONDAY A MALE OR A FEMALE? For the identity of this terrorist is like a hidden treasure.” This was the speech given by one of the reporters. Who knows after black Monday must have dealt with the government officials, the fate of the individuals. The city was thrown in a state of circumambagious circumlocution. The city is in a state of bewilderment, thrown into the aquarium of cacophonic chaos. Most individuals were migrating secretly for fear of what the future holds.
“You don’t have to be afraid, the police will ensure that every one will be saved. I and my colleagues will make sure we put an end to this” says the inspector general of the state. Those words are not enough, what were the police doing since the death of Senator Newman Freedom (Minister for Foreign Affairs), Honourable Godson Osagai (Minister for finance) and now Senator Humphrey Urum (Minister for transportation). Yet more are to be killed. The head of state is in a state of confusion as these three killed are his close friends. He has called for an emergency meeting as to solve the matter at hand. Black Monday has proven himself black indeed. His up to no good. (That is if his a male). No one knows his resident and now he leaves a note and a CD on Senator Humphrey’s corpse.

“I said we are not giving the allocation to those mice. What for? My children has to go abroad and my wife she needs a lot of money for her birthday.” But sir those expenses are not necessary, there are poor masses out there, they need ultimate care. I think we should allocate the money for the marine traders.” Will you shut up!!! No one questions my authority. Listen young man I will kill you if this doesn’t go as planned.” “Yes Sir!”
He whispered to the Manchu guy close to him and off they went.
* * * * * * * * * * *
Who was he to you!!! That sound can shrink an amoeba immediately.
“He….. He……. He was a friend” came the reply.
“Shut up! A close one, a very close one but you betrayed him. You left him to drown in the cold sea. He trusted you. Why? He loved you, 20 training years in the camp and all you could do was to turn against your own team.”
“I….. I…… I am sorry, please spare my life. I have children, wife. Please have mercy.”
“Where was your mercy 18 years ago? Didn’t he had children, wife? Answer me!!!! He did but you never cared!
BOOOOMMMM!!!!! Goes a loud Todd. He went crashing down the cliff. He was dead.
“So far so good. A nice way of paying for a big sin. Number 4 in progress. Take note!!!”
The video tape went off. Hmmm. I think I get something here”, replied the Constable. “Black Monday is on a revenge mission.”  “Yeah, I think so”, replied the Inspector General. “But the big question is on what ground?” “Can’t you see? I think is betrayal. One event that took place 18 years ago” says the intelligent Constable. “Hmmm”. The general nodded. “The note says number 4 in progress, who can that be? But sir I think black Monday isn’t really a terrorist, look the video here displayed that he is a corrupt leader. You know what I think… his actions are based on JUNGLE JUSTICE”. Just when the Constable was still trying to find an end to the means, a news flash broke their conversations.
HEAD LINE NEWS…………
The voice from the TV reads “Headline News: Minister Humphrey’s house burnt down to ash, killing his wife and two kids. This was a night after his murder”

Kpum! Kpum! Kpum! The sound of the gun shot can be heard miles away. The little child kept smiling. “Look dad, I did it, I shot all the targets. Head, neck, shoulder, trunk and limbs.” He kept a stern face. Kpa! Kpa! Kpa! Kpa! The velocity of the bullet was as fast as the Rutherford’s atom or should I say the kinetic energy of molecules of a boiling water. “You are a lot so slow!” He yelled. That is exactly what I wanted you to do. Hit all target at once! He ordered. One could see the expression on the child’s face. “Hey! Take care of the child” he ordered.  “But sir, he is still a child, at his age he tries more than those adults in the training ground.” Came the reply. “Will you shut up! If u won’t do as I say I will eliminate you” the middle aged man yelled. When it comes to the boss, the word elimination means anything. That man is mean. At his late forties he is still stronger than any youth. “Yes sir”.
“Here child, hit that log down.” I wonder how a child of 5 can hit a log of that great thickness down. The sound of the deafening thunder struck. The heavy droplets of the rain flogged with anger.  5 hours later the log is down. “I did it dad” the child shivered in the cold. The blood streamed down his hands, decolorizing the water pools around him. “It took you ages to do that” come get into the house, training continues tomorrow. The child was dejected. Slowly he moved towards the tent.
“Come child let me tend your hands” came that sweet voice that melts the child’s heart.” Your father wants you to be very strong. He loves you, so don’t hate him at all. I don’t like this lifestyle, I want to be free, I want to live a normal life”. He cried. Shhhh! Now go to bed while I tend your hands.
I wish my mum is alive” he whispered.
* * * * * * * * * * * * *
I think black Monday is really a terrorist. Burning humans alive isn’t also among the so called jungle justice. This is beyond what we all think.