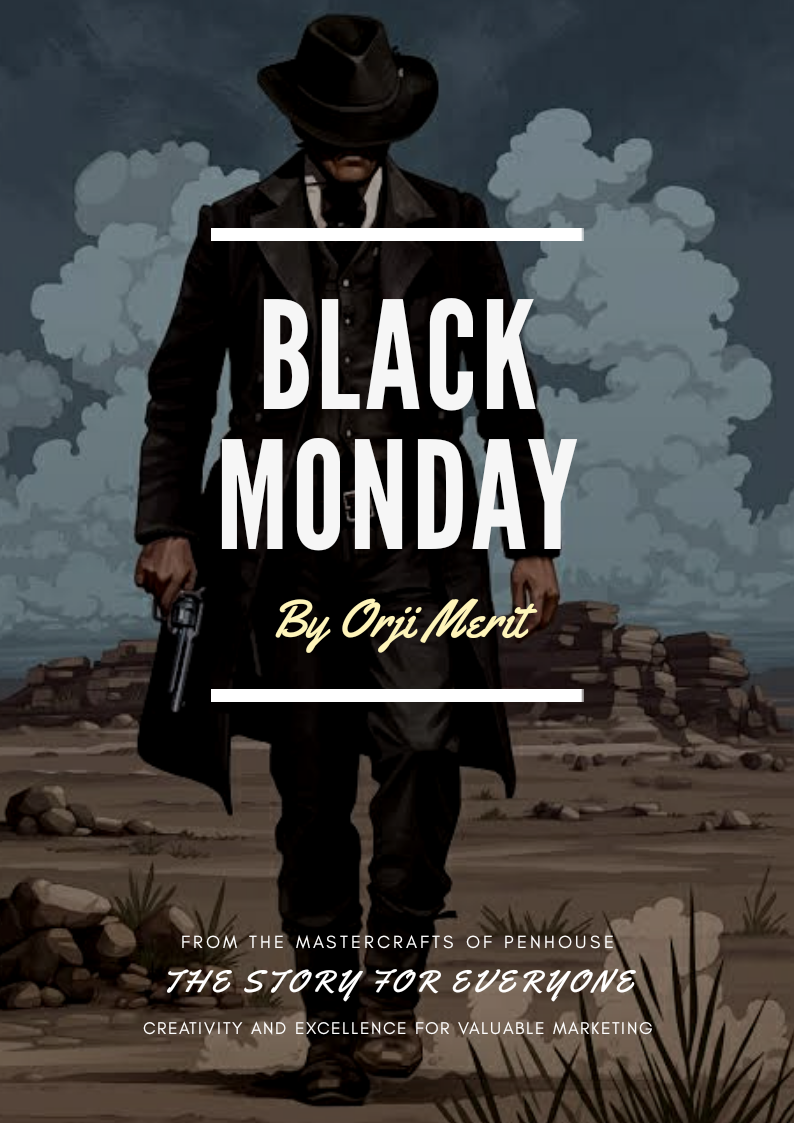 A vampire sucks his blood
BLACK MONDAY: EPISODE EIGHT
I got to my country (Niger coast) in west Africa, my dad has already briefed me on the people behind my mum’s death. They were seven in number. In other not to be suspected, I joined the F4 music screw. We were four in number and am the only girl. The most beautiful you know. I changed my name to Eldina so that I won’t be traced. I was a smart killer. Lest I forget. The seven persons am about to kill are the top ranked personnel in my country. They have high affluence and killing them requires a lot of wisdom. I don’t just want them dead I also want their family to suffer like I did. I want all round revenge.

I joined the screw because I have a very lovely voice. Though I went on the audition and luckily I passed. I met Braine the most serious. Gery, the funniest and Tanny the coolest of us all. As for me, am the youngest and termed most timid. Our director Mr. John likes me a lot he takes me like his daughter maybe because am very pretty.

He said I looked much like Mrs. President. Wow am yet to see her. I have stay in the crew for five months and have already gained popularity. My name and picture is seen in almost all billboards and advertising media. I was even registered with a modeling agency. I was so rich. That was how I met Lydia. I will tell you about Lydia later. Back to the story! On the sixth month Dad arrived. He was here to remind me of the mission. Later that Friday night he invited me to his suite, I sneaked out of our mansion (for the F4 crew stays in one house) on disguise. I dressed like a man and wore a black mask, one who saw me could literarily see a man in black. I was on black through out to blend with the colour of the night. I met dad at the location, he fired at me, and he blamed me for not getting to work. He accused that I was now after money than my main mission. I apologized and promised to kick of the next Monday. I choose Monday, because that’s the only day of the week that was clear for me. I took the picture from dad and disappeared.
BLACK MONDAY: EPISODE NINE
I climbed back to my room through the window. That wasn’t a difficult thing. I’m trained remember. I slept as though nothing happened. The weekend was fast spent. And I was ready to kick off the next day. I told my director that I was going for a walk and would visit madam Celine from there. Madam Celine was a blues singer and am to feature in the next dinner party that would be held in Royal suites. And it’s gonna involve all the elites in the States. Talking of the dinner party, I think that would be the next place to hit without being notice. I would kill my first target there. I was granted permission and I hurried to madam Celine’s lodge. We talked briefly and I told her I am going to the chemist, I did all this not to give any room to suspicion. I walked into the nearby bush and changed to my manlike attire. I walked out no one would believe am a girl in that attire. As I walked I thought of the best way to get my revenge and be justified.
BLACK MONDAY: EPISODE TEN
Saturday 8:00pm
Royal suites.
Blues song plays in the background. Rose is seen with her crew singing the Celine Dion’s “I will be your angel”. Their voices were well blended all eyes went on Rose. “Mehn she was beautiful.” This was the thought of every man there that night, you could see it in their eyes as they watched her sing.  She sang with full confidence and her makeup made her look like the beautiful Queen of England.
All elites in the state were present. But there was this resemblance. Between she and Mrs. President. Are they connected somehow? Lost in her thought, she saw her dad walk in and pretends to be Mr. Pablo. A black Spanish company associate. He was given a warm welcome. Their eyes met. She knew what it was. She sported her target. Mr. and Mrs. Belgian. The state governor and his wife. Ooops sorry I think this is your last supper, she shrugged. You must pay for this. My mum’s soul will rest in peace now.
She slowly danced to the floor. She smiled to all those present and excused herself to the toilet.
“She looks so innocent and beautiful, I just wish she is my daughter” Mrs. Belgian said to her friend. Yeah I think so. She’s loving and kind” came the reply. I heard she’s starting a charity home for the less privileged. “Oh that’s so sweet, I will surely support her” I love her so much, her voice melts my heart”. Suddenly the light went off, an unknown figure pumped out of the roof. Kpa kpa kpa!!!!!!! Mr. and Mrs. Belgian were dead. The figure disappeared.

The entire hall was rowdy the party ended. Security everywhere. How the figure got to the venue despite all the security was a mystery to everywhere. How figure got to the top of the killing, killing the target without killing somehow else still remains a mystery. Everybody is running helter-scatter. One on the band member bumped into Rose along the hallway to the toilet. “Eldina, we need to leave at once, there is a shoot-out. The governor and wife are dead.” Tanny informed with great fear in eyes. Rose, the Eldina to Tanny returned the same fear.

BLACK MONDAY HAS DONE IT AGAIN. WHAT THE HELL!!!
BREAKING NEWS!!!!!!! Governor and his wife killed at Night out party in the governor’s villa.
“To be continued”