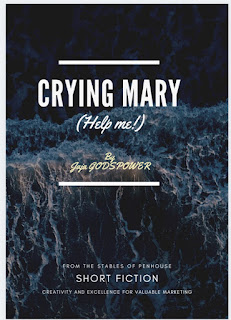 Not all that glitter is gold

BOOK ONE: BED OF ROSES

“Isn’t it obvious that I did not kill him? It could mere coincidence that the general died after I left. And besides, he died a natural death…” I confronted the interrogator strongly with those words. My mouth was the only weapon I could use because I was chained both hands and legs, a prisoner that is about to be killed.  He looked at me with disgust in his eyes gripping my neck fiercely that I almost choke to death. I am in jail for a crime I know nothing about or perhaps I did commit the crime. Perhaps I killed the general or perhaps, I never saw it as a crime in killing him. As he hold firmly to my neck, he pulls me  closer to himself, his bulging eyes scaring the life out of me but then I was firm. I was standing on my right.
“A knife was thrust into the senators heart, and you call that a natural death? Your father should have…” “I don’t have a father! And don’t you mention father to me again!” I cut in before he could finished the statement, I scream into his ear drums breaking every fibre with my groans and grunts. I guess I returned the favour but this time he was more perplexed and transfixed. “Your stubbornness leaves me no choice but to fulfil my duty. “You will die today, so better start your prayers”, he sarcastically said this to me but I wasn’t move at all, perhaps I’m dead already, the second death means nothing to me anymore but a journey to eternal rest. “Before you kill me officer” I drew his attention. “My name is Mary, a nineteen year old prisoner to be hug to death.”

“This is the gory story of a girl that was fated by the wind of destiny to be a victim of abuse. As a growing child, I had the best family. My parents played and lived together like little kids. We were peaceful, until the unknown beast came… and everything changed. The bane of life stirs at my face…” As I narrate my story to my killer, uncontrollable tears floods from my eyes like the river Euphrates flowing on the table. “I had a broken family, my mom and dad stopped loving each other, they never kissed when they were together. They never loved each other or me for that matter. I was made to understand that I’m the reason why the family’s not together. We used to be a wonderful family, my classmates would want to come to the house because of the love that binds us. It was such a happy family, my father and mother would play as if they were little children. I envied them, I wanted my marriage to be like theirs when I grow up”.

It was my 13th birthday, my dad, Sotonye had taken us out to the mall, and we visited pleasurable sites. He bought a whole lot of gifts for me and mum and constantly reminds us of how we mean the world to him and how he would do anything to make us happy and protect us. He fear to lose any of us. I was happy that day. It was evening that same day at the dinning. The dinning has always been the place where we enjoy and much love is expressed to us. But this day was different. My joy was cut short. I think something else has enter the house. I called it the beast, the hydra-headed monster had crept into the house. That night, Dad and mum were eating without talking to each other for the first.
“Please can you be responsible for once, with the courtesy of table manners?” My mum, Mina said with so much anger in her eyes. I wondered why she said that and sounded that way. I was lost because it was all rosy before this time. What has gone wrong? I couldn’t fathom the rationale for mum’s behaviour. Dad looked at mum in disdain without uttering a word. Mum fired on, “you should try at least be responsible while eating. If not for yourself, for the child. My child!” Why is mum personalising me to be her child, instead of the regular “our daughter” that I’m used to? Dad refuses to say anything, I think this aggravated mum the more as she keeps yelling and talking. She bangs her hand on the table, dad plate fell to the ground giving dad a little cut. With fury in dad’s eyes, he raises his hand to slap mum. And Mum trying to duck the slap could not allow her mouth to stop talking, “yes! Go on, hit me, try it, why stopping? What’s stopping you, what’s stopping the heavyweight champion? Go on, hit me, and get the hell out of me. Try it and feel the poisonous venom of a dangerous snake”.

A thousand thoughts perused my head. I stand in awe to this drama. Is this a scary tale or a reality? I couldn’t decipher the puzzle that got me static like the statue of liberty. Why must it be today, if at all mum and dad wanted to discuss with their voices high because I couldn’t believe they were fighting, today was the wrong day to choose. Unable to behold the sight, I stood up to leave the place for them to continue. Mum tries to follow me but she was withheld by dad’s firm grip. I saw his veins tearing and ripping out his flesh to show the strength with which he gripped mum. She felt the pain, I could feel it too in her groans. I’ve never seen mum and dad like this before. “Since you stared the singing, let us dance together”, dad said as he grins at mum holding her by the neck. He pushes mum to ground as she falls like the crash of a plane. “Don’t you dare go close to her!” he warned. “And what will you do?” mum responded by grabbing his shirt. “What will you do? Beat me? Then go on… beat me, you beast, and wife beater and…” before she could finish her rants, a thunderous slap choked the remaining words into her mouth. Dad slaps her repeatedly. Mum and dad struggles with the shirt as dad tries to remove her hands from his shirt. They engage in a fight. Dad succeeds in beating her Blue black. I tried to intervene but the bazooka slap on my face kept me searching for the unknown on the ground. With flowing tears I was still roaming around the ground like a confused blind bat. Dad left us helplessly on the ground to his room. I want to wake up from this nightmare, but I couldn’t. Is this a reality I must accept? I’m just thirteen, this is too much for me.

BOOK TWO: THE CRACK ON THE WALL

This state of chaos and catharsis became the other of the day. I could literally see Adolf Hitler and Mussolini in the house. Another traumatic experience was the day my English teacher came to the house. She has noticed my incessant absentism in school and my recent poor academic performance. Every deteriorated in split seconds. I have lost touch with my academic and social life, I am a shadow of myself. A lost ghost in a wander land where I roam like a vagabond. The conversation between my teacher, Miss Clara and father did not go on well, because they were shouting all through and dad ended up asking her to leave the house.   The fury of dad that day was ten times that of Tyson Fury. He sat on the sofa in the living room like –a wounded lion waiting to aggressively devour its prey. His rage was so quick in attacking mum the moment –she entered the room, “Mary’s teacher, Miss Clara just left now. And she complains of Mary’s poor behaviour in school. And also inquired why she has not been in school for some days now. So… tell me what happened.” His disposition was already like that of Spartacus, I could read his thoughts from his eyes, I could see the burning fire and rage in his eyes. They are bloodshot and scary like those horror movies. “I don’t know what you’re talking about.” Mum responded innocently and that was her crime. Dad pounced angrily on her, his voice yelling like the chorus of the gladiators of Sparta. His grip is already on her neck, “you sure know what I’m talking about, damn it! Give me tangible and reasonable reason why Mary has not been in school! So start talking! Before I devour you and send your carcases to the vultures.”

Mum tried and luckily freed her neck the beast’s claws. “Stop it! For God sake, I’m a career woman. An educated woman whom you have reduced from performing what pleases her. You have forfeited the reason for my schooling and yet I’m not worried because I want to marry. For goodness sake, I’m a master’s degree holder, and yet I will wake up very early in the morning to make food, prepare the child for school and take care of the house. Just to drop her in school as you go to work is too hard for you, and then it’s hard for me too. I am woman, I have my own life!” Dad laughs hysterically, “will you just shut up your nonsense mouth! You’re just a lazy bone. What is there to take care of a child? One child, Mina! One child!” “And it is this same one child, you cannot take care of her. So why are you complaining?” He screams out his lungs, but this time mum gave it back to me in his coin. I was scared for mum because we both know the impending doom that looms already. But I guess, the worse to happen to mum is death because she has received all the beatings on earth, she has received all the knock-out like that of the WWE summer slams. At this time mum has already burst into tears, her eyes are already flooded with the oceans of her tears. She began to release her venom, just then a firm grip on the neck choked her ranting, “Mary will never miss school again, you hear me! Stupid!”  He pushes her away as she crashes on the floor. He walks into the room angrily. I ran to mum as she cries broken on the floor, mum held me tight to herself as we cry together with no one to console our broken souls.