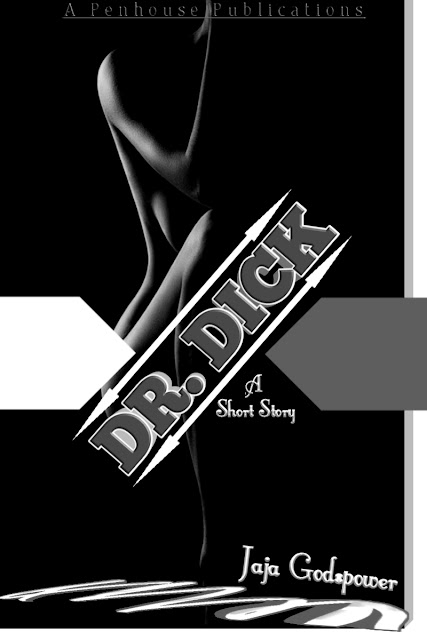 For a cock that was not completely erect, it was already quite sizeable.
My body buzzed with excitement as I got dressed.
I carefully picked out my outfit. I opted for a blue figure-hugging dress. It was knee-length but quite a bit of cleavage peeked out from the V-neckline.
As I slipped on my heels, I gave myself one last glance in the mirror. I hoped my look impressed Charles. I was meeting him for the first time.
Charles and I had been online buddies for a long time. We shared a lot of sexual fantasies and even enjoy some sex chat from time to time. I have never really been a fan of phone sex, but I liked it for the entertainment value. Charles blew me away one day when he sent me a picture of his dick. I literally gasped when I saw it. That shit was huge, the hugest I had ever seen. If I had to guess, I would have put that dick at about 9 inches.
We soon had a tradition where he sent me a dick pic every morning. He graced me with all angles of his cock and I spent hours looking and lusting after it. Sadly, he lived in Kasoa so my fantasy of being able to ride that dick had to be postponed. I touched myself so many times, imagining it was him sliding into me but that only left me wanting him more.
Now I had my chance. He was coming to Lapaz for the weekend and he dedicated a night to pleasing me. I was beside myself.
Since we did not want any distractions, we chose to meet up at a hotel. I arrived at our room, excited and ready. He was already there, patiently waiting for me.
We laid in bed together for a while, getting comfortable in each other’s company. We engaged in some small talk after I asked him how the journey to here.
Soon, I could not take the waiting anymore. “Can I just see it?” I asked him.
He smiled knowingly, not needing to ask me what I meant.
I unbuckled his jeans carefully and unzipped it. I licked my bottom lip in anticipation as I removed his trousers. I could see the outline of his penis through his shorts and my heart began to pound. Slowly, I pulled down the band of his boxers to reveal his semi-erect penis. For a cock that was not completely erect, it was already quite sizeable. I discarded his shorts and I bent my head down to truly appreciate him.
Using my mouth, I covered the tip of his dick. It jerked slightly in my mouth and I wrapped my lips around it. I swirled my tongue around the tip excitedly and he groaned.
I began to cover more and more length with my mouth, sucking and lubricating him as I went. The more I sucked his cock, the bigger he became. It was thrilling, the way it kept filling my mouth and never seemed to stop growing. Soon, I was able to use my mouth to cover only about half of his cock.
I drew my head back and looked at the cock in admiration. My breath caught in my throat. His dick was bigger than I imagined. I wrapped both my hands around it and began to suck the remaining length. I moved my hands and my tongue in tandem with each other as I stroked his whole shaft making sure to swirl my tongue around him as I went.
He groaned even louder now as I gave his cock my all. It truly was a magnificent dick and I really wanted to impress. I let my own desire for it build as I was determined to get as wet as possible for this cock.
After a few minutes of mouth-fucking him, I sat up to take off my dress. He sat up too to help me undress and take off his own shirt.
As soon as we were both naked and trembling with excitement, I pushed him down and straddled him. I brought the tip of his big cock to my entrance and bore down so it invaded my slit. I held my breath as the head of his cock teased the entrance of my pussy. I pushed down further to take him in some more and I cried out as his cock split my pussy open. Using my hand, I could feel that there was still more length to cover. I was worried for the first time. Had I bitten off more than I could chew?
The more I pushed down, the more painful it got. He was very patient with me and let me go at my own pace. When I was finally able to sit on his dick so completely tha

t my ass was resting on his thighs, I felt like I was about to explode. His cock had filled me so completely and the edges of my pussy were stretched to the extreme. I sat that way for a few moments, scared to move in case it caused me pain or some kind of injury.
It seemed Charles’s patience had run out because he grabbed my waist, dick still in me, and turned me around so I was lying in bed and he was on top of me. Before I could say anything, he began moving that large cock in and out of me.

. I was crying out as he slid forcefully into me. I was not sure if I was crying out in discomfort anymore at this point because as he fucked me, I began to feel myself get wetter.He was hitting my G-spot as he entered so it was a mixture of pain and pleasure. He was panting, perspiration all over his face as he moved that mighty cock in and out of my tight cunt. Steadying himself with his palms on the bed, he pushed into me. I spread my legs as wide as they could go, welcoming him. His face was scrunched up in concentration and I was going crazy as he fucked.
In no time at all, all I felt was pure pleasure as my pussy got wetter and wetter around him. He groaned loudly when sliding in and out as if enjoying the extra lubrication too. I wrapped my legs around him, causing me to feel his cock even deeper as he went. I was moaning with my eyes closed as I felt my orgasm building. He slowed down the pace of his thrusts when he noticed I was close to cumming. I was grateful as my pussy squeezed even tighter around him, riding the most intense orgasm I had ever experienced.
He was watching me as I came and when I calmed down, he began to pound into me harder again. I was crying out, moaning his name loudly as he fucked me like a man out of control. I groaned as I dug my nails into his back. He gave a loud, animalistic grunt as he pushed into me one last time and stilled, shooting his cum from his large cock into my cunt.
We spent the night together, and by morning, my pussy was on fire. I felt extreme discomfort each time I walked and I knew I was going to regret this cock for a couple of days. But it was totally worth it. Hmmm A dick of no mercy….