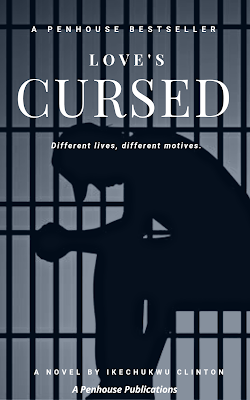 THE CURSE LOVE BRINGS IS WHIRL

She stared into my eyes, and for a moment, it seemed the world was silenced. It had been 9 months since she last visited. I had begun to fret, but there was something special about our undying love, something I believed in and it gave me hope. I pressed my hands against the glass, separating prisoners from their visitors, like I would feel and revel in her warmth but, there, she sat, unmoved, solemn, her hands grasping onto a handkerchief. It was then, I realised that unfamiliar stare in her eyes, that unfamiliar blank face and the way she forced a smile but it still looked fake.

“Cloud-m,” her words came out softly. The first time she called me that name was the night we made our first love. The night was cold, the radio played soft blues and the rains showered lightly on the aluminum zinc, giving perfect base line to our rhythmic blues. And when my black stallion was in her, she shut her eyes, she gripped crazily, her tongue tickled my ears, moaned calmly and later in the morning, she said, ‘You rode me to the centre of the world. I was in the clouds but could not see the heavens. Months later, she kept calling me ‘cloud-m’ especially after I won her heart over from Rex.

“You still look hot,” I said to her now. She responded with a puzzling giggle. The type she gave to me when we first met at Emmatex Fast Food. Then, she was with Rex, the dude who drove the coolest cars in school, who was every lady’s dream on campus. Being the hottest chic on campus, she was a perfect match for him. Until I tore their perfect knitting apart with my killing lines. But our sweet meal took a sour taste, one night. It was that night, at Nelson Mandela Hostel. We were walking to the school love garden when Rex suddenly came out of his red ride, screamed at her and gave her a resounding slap. Then the boys of Nelson Mandela Hostel started screaming to me, “Oboy u go gree? Chei! see slap, aboy u gats fight for ur woman.” They kept urging me to react, I couldn’t bear the humiliation, but no one would dare to challenge Rex. He was the biggest boy on campus. He was also from a prominent family in Rivers State. But I’m also a man and how can i possibly bear this shame. Out of nowhere, I took a bottle and knocked him off. And that was it, he fell to the ground, the hostel boys started hailing me. But my slight victory became regretful weeks later, Rex was in coma, his family took me to court and the next thing, “You’re sentenced to two years imprisonment.” My priceless diamond cried rains, her hands stretched to touch me once more, as they took me to the Black Maria, hands chained, legs chained.

“It’s just 3 months to go, we’ll soon be together again, your love gave me hope.” I said, trying to doubt the oldness of things, trying to ignore certain creeping doubtfulness, trying to believe all is well.

But surprisingly, she said now, “I’m sorry,” tears trailing done her cheeks. I was still confused until she unclenched her hands from the handkerchief and a gold ring shone on her fourth finger.

At that moment, I was stunned. Silence came to me alone, she was talking with teary eyes but I couldn’t hear her, I couldn’t make sense of her words. How could she be this heartless? No, it’s not possible. I just couldn’t believe my eyes. I felt our love was love. “What? I don’t understand?”  I gazed at the chains in my feet. My head was full of thoughts. Memories of our clinging together flashed in batches.

It was unbelievable. I felt the world has betrayed me, I wanted to be free again but ,now, I feel like remaining here in chains. How could it be. Our union, she wore boldly to the eyes of the world, her last visit, she said she will never let go, she would wait. Oh! I felt betrayed, she’s now married to Rex? No, this must be a dream. I felt we were in love, I felt our love was undying but now, I felt our bond was beyond gold, I felt our bond was as strong as titanium but now, I realise I was just a pawn in her chessboard.