STITCH ME UP! THREE 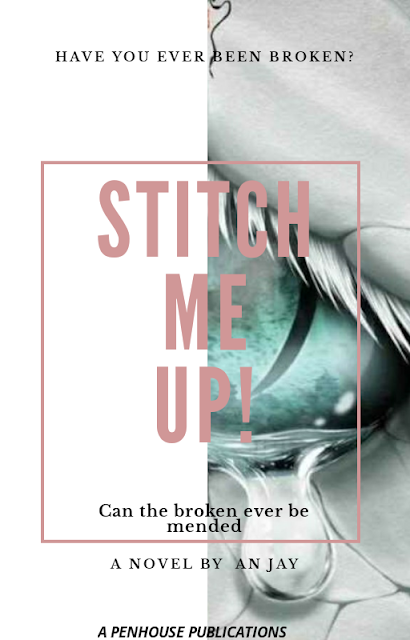 Amy’s feeling weird. Something about that lady isn’t right.
And Ryan doesn’t look like a bad guy either. Although I wonder why he acted that way in the party. Do you think he’ll give Amy a chance.

📌STITCH ME UP📌
✴✴✴✴✴✴✴✴✴✴✴✴✴✴✴
.
.
Chapter 8
.
.
Ryan’s P. O. V
I drove my car into the garage of the storey building where I lived. Picking up all of the files and my briefcase, I descended from my car and locked it before walking to the elevator. Pressing my floor button, I walked in and closed the door. Few moments later, I arrived and walked out. Getting to my door i opened it and walked in.
It was then I noticed that someone was already in before me. The lights were on and I clearly remembered turning it off before leaving this morning. Who was it and how did the person get in? I wondered. Moving cautiously I looked around hoping I would catch a glimpse of the person.
Suddenly, someone jumped on me from behind and placed a firm grip on my mouth, startling me. We struggled for a few moments before I finally overpowered him and pushed him on the floor. He landed with a groan. I bent down and proceeded to punch the hell out of him but my hand froze halfway through when I realized who it was.
Carl? Seriously now. I almost thought it was someone else. By now the idiot was already laughing hard.
“scared you, didn’t I?” He asked between gulps. I scoffed and stood up smoothing my shirt ruffles. He stood up as well, watching my expression.
“ you do not scare people like that Carl. I almost killed you ” I said going to the refrigerator to get a drink.
“ I know. Wanted to surprise you ” he said settling on the couch.
“ how did you even get in anyway?”
“ every apartment house as a master key, you should know that by now”
“ Seriously!? Well you shouldn’t try that next time, you might not be very lucky”
“ Oh whatever…. With you it’s always work, work, work. I thought I’d lighten up the mood a bit”.
“ You did a good job then” I replied
I took out the files and began working on them. Carl came to join me later.
“ what are you doing? ” he asked seeing me buried in work.
“ sorting. Seeing who is eligible enough to get into the contest”
“ I see, they have pretty good designs by the way. It’ll be hard to choose”
“ yeah, but I’ll try”
While Ryan was going through the forms, Amy own popped out. He picked up.
“ Amelia Kurt!? She’s in the contest. I bumped into her this evening. She’s really nice”
Ryan scoffed. “ Nice? I wouldn’t say that if I were you”
“ what’s the matter? Did she do something wrong? “
Ryan looked up at Carl. “ she’s the lady who spilled drinks on me”
“ No way”
“ Yes way”
“ come on, she’s to pretty for that ” Carl countered.
“ but she did”
Leaning closer, Carl had a smirk playing on his lips. “ so what did you do. Huh? Say it’s alright and try flirting? “.
“ don’t be stupid, I over reacted and it eventually got her fired”
“ wait… What!? How could you? ” Carl shot back.
“ hey, don’t put the blame on me okay? You should know by now that am not comfortable at parties, especially parties me. Besides she already hates me so there’s no need to worry “
“ so you won’t do anything about it? “
“ probably not. There’s no need to” I answered
“ bad choice bro, bad choice”
“ Thank you. Now can you please leave me? I’m trying to work here” I complained
Carl shrugged. “ whatever, suit yourself ” he said as he stood up and proceeded to the couch to watch TV. I grimaced. Some people can never change.
.
.
.
Three days later

Amelia’s P. O. V
“ it’s been three days Mabel… Three long days, and have not heard anything ” I groaned. On the chair.
“ Calm down Amy. You’ll get it, what’s the rush anyway? “
“ But it’s been three days, how can I possibly calm down knowing Ryan’s is in charge. What if he decides never to let me in. I’ll be ruined” I thought aloud. This all thing was freaking me out.
“ I’ve said this before but I’ll say it again. Ryan can never do something like that. He’ll let you in. If he thinks your designs are good”
Nothing was convincing enough. I’m a nervous freak. I know I should take it easy but I can’t help but get over paranoid.
“ I think you should take a break, go for a walk or something. Your staying here and mopping on things won’t help ” Mabel suggested.
I nodded sadly.
“ maybe you’re right. My brains kind of muffy anyway. Walking will help clear my thoughts “. I picked up my jacket and walked out. It was evening so the breeze was kind of chilling. I began walking to the park at the apartment where I stayed.
It was quite long before I arrived. Already I can feel my thoughts clearing and I was feeling. Children don’t play in the park during this time so most of the people I saw were couples, most of them holding hands and it got me feeling wistful. They all seemed really happy and content, two emotions that were not in my reach for now. My parents never had a happy marriage not to talk of them holding hands, and it sort of affected my own relationship with other people. I’ve not even had my first kiss yet.
I sat down in one of the park benches and began drawing whatever came into my head. I really wasn’t paying any serious attention to it. When I was done I checked it and what the hell!!…. It was a picture of Ryan!? I huffed frustrated, when will I stop thinking about him. I don’t even like him! I yelled in my mind.
This is all so confusing. I try coming to clear my head but I just end up confusing myself. I squeezed the paper and threw it to the bin and began walking home, even more frustrated than before.
Walking in, I met Mabel making. Always cooking, that girl. She noticed I was in and came to join me in the living room where I was already sat slumped in one of the chairs.
“ you’re back. So how did the walk go?” She asked.
“ terribly, right now I might probably kill myself if I don’t get any message” I stated.
“ it hasn’t gotten to that point Amy. Give it time and I….”
My phone buzzed interrupting Mabel. I checked it, it was a message.
“ Mabel it’s a message ” I announced, somewhat excited and worried.
“ go on, check it. It’s been what  you’ve been waiting for all day”
“ OK ” I gulped as I clicked on the message.
😊📩📩📩📩
Dear Amelia Kurt. You have been accepted into the fashion contest 2019. Good luck.
Yours sincerely
The management
Mabel was straining her eyes to see.
“ What did it say?”
“ I’ve been muttered ” too flustered to believe.
“ you’ve been accepted? ” Mabel asked.
“ Yes Mabel. I’ve been accepted. I’ve been accepted! ” I screamed when it finally sank in.
When finally understood she screamed too.
“ you’ve been accepted!! Oh my gawd! My baby has been accepted. I’m so proud of you”
Mabel hugged me. Tightly.
“ awwn thanks a lot Mabel. If it wasn’t for you I would never have done it” I confessed
“ no need to thank me. I’m glad you got in” she replied.
“ congratulations “
“ thank you”
We stayed in that position for moments until I smelt something burning. Actually we both smelt something burning. Mabel immediately gasped and pulled away from the hug, pure horror on her face.
“ oh my gosh!… I forgot the pasta on fire! ” she exclaimed. I put on a shocked face, it was fake. I guess we were too caught up in our celebration Mabel forgot dinner on fire.
“ oh my gosh. Go check it hurry! Dinner can’t burn, I just got accepted! ” I yelled as she ran to into the kitchen. After a while I called out.
“ is everything okay in there?”
“ yeah, I’ve got it under control “
“ OK. Please hurry, I’m hungry.” I announced, rubbing my stomach even though she couldn’t see it.
“ you’re out of your mind” Mabel yelled back. I chuckled, Mabel is crazy.
.
.
.
To be continued…

Amy has been accepted into the contest. Yay! Am so happy!! But wait, who thinks this is just the beginning of Amy problems…..
You know what? Let’s not talk about that.

3 thoughts on “STITCH ME UP! THREE”